Home › Art › What every Artist should avoid doing

What every Artist should avoid doing

I have done what every Artist should avoid doing.  I am still not sure if it was a mistake to proceed or if it taught me to listen to my instincts.  When that little voice in your head goes, “Eh, I don’t think this is a good idea…..this could cause some sort of problem.”  Listen to that little voice.

So what on Earth am I saying should be avoided by all Artists?  Doing artistic work on another Artist’s completed work.  Perhaps it is okay if you are fulfilling the Artist’s dying wish to have a project completed and you were their apprentice or some other closely associated artist of equal ability, but that was not the case of the situation that I found myself in.  About six years ago I was introduced to a man with an intense private art collection that was and is part of his family’s collection.  This amazing noble gentleman, who I now consider a dear friend wanted to have his portrait of his daughters completed with his family heraldry.   Heraldry is often added to portraits to help proudly identify which noble line that the subject person hailed from and the original artist did not feel comfortable with painting heraldry.  At least that was what I was told.

To make matters even more complicated the original artist was the man’s “American Mother” and she was still very much alive.  So when the gentleman approached me to alter his mother’s painting of his daughters, I heard that little voice go off in my head – Danger, danger, danger Will Robinson!  So I told him that I did not paint in oil and that this was an oil painting and wondered if this was a wise idea.  I would have to paint in Acrylic on top of an oil painting.  He assured me that this was indeed possible and showed me the rather complicated heraldry associated with his family.  When that did not dissuade him, I asked point blank, “Is this alright with your mother?”

His reassuring reply was that she had wanted this done and did not feel comfortable doing it herself, which I could understand for several reasons.  First of all, the heraldry was more complicated than what I was used to seeing and her style did not lend itself to painting heraldry.  She is one of those painters who use liberal amounts of oil paint and develop very textured works of art, which is also not conducive to painting heraldry.  So I was looking at a turbulent wavy surface like the ocean to paint this complicated heraldry upon.  I was going to have to place a very structured style on top of a more lose and free style of painting.  And for those of you who are not painters, Acrylic paint tends to be very bright and cheery while oil is often more subdued.  Heraldry when done by the professionals is done in very basic bright colors since that is part of the tradition and these colors have meaning, so it is important to retain the proper color. 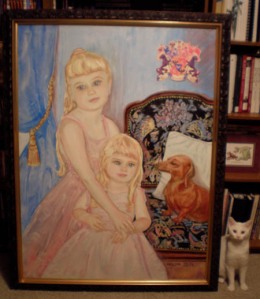 Note: the small white creature standing to the right of the painting.

Eventually, I found myself with this rather huge painting (approx. 36” x 48”) in my home feeling very nervous about how to approach this project.  I first dusted off the painting since it was many years old already and tried to determine what size I could actually paint such a detailed heraldry upon.  It needed to be as small as possible but still allow me to successfully do the work.  If I made it too small, then I might mess up the painting by doing a bad job.  Yah, that ugly fact was sitting LARGE in the back of my mind too.  I could actually ruin the painting, which would have been a shame since it was a nice portrait of the man’s daughters.

After showing the man a couple of potential sizes for the heraldry and determining exactly where he wished the heraldry to be placed, I began the work.  It took me two months to do the project since I was fully employed as an office slave at the time and did not have an art studio.  Lighting was important and I needed to find a safe place to work on the painting that was still in its frame.  While I did not and do not have any children to consider as being potential hazards, we did have two cats, one of which was a kitten with a full set of needle sharp claws and the painting rested on the floor since I did not have an easel and even if I did, I would not have been able to reach the required area to paint if I had put it on one.  It was determined for the safety of the painting that it be stored at all time while not being worked on in our bedroom where the four legged fuzzy fiend with claws was not allowed access to.

When the day came to return the painting to the man and the work was all done, I was greatly relieved, and fairly proud of the work that I had done.  Placing the heraldry on the portrait insured that the portrait would be placed amongst his noble family’s treasures forever insuring that his mother’s artistry would not be forgotten.  It was nice to think that I had made sure that one more artist would not be forgotten due to some unfortunate sale or misplaced shipment.  As long as the painting existed, her portrait of her granddaughters would be forever known as part of their family heritage and her name would also live on for future generations to admire and remember. 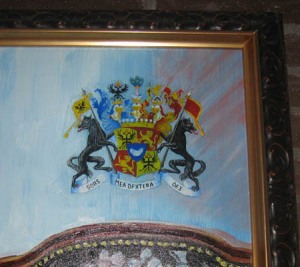 Unfortunately the photo does not show the texture of the painting. So often photography seldom does justice to artwork. You have to see it in person to truly appreciate art.

With such a seemingly happy ending, why is this a cautionary tale?  Well, it did not result in a happy ending.  The man loved the heraldry and it was exactly what he wanted, but his mother absolutely hated it and felt that her painting had been ruined.  This of course, he tried to hide from me, until I started to wonder why the painting was never placed back in its original spot on the wall.  Then I got another friend to finally tell me what did happen and when he told me, I just knew this was going to happen and had tried to warn the man about me making the changes to the portrait of his daughters.  There was nothing I could do.  I had already sprayed fixative on the painting to protect the oil as well as the new acrylic since this had never been done and she had exposed canvas showing through her oil work, which in the long run could cause the painting to weaken or so I had been told.

But the drama does not end here….

The man being a clever gentleman taught by world renowned artists on how to care for and preserve art carefully took watercolor paint and put a graying layer over the acrylic heraldry to make it look not so bright hopefully soothing his mother’s woes, but while curing her anguish, it only made me feel miserable and hate the work that I labored so arduously upon because it now looked dull and no longer like proper heraldry.  I felt it made my art look sick and poor.

Five years have passed since that little adventure and I still look at the painting with a critical eye of regret and frustration, but the man claims that his mother now likes the painting again and is pleased with the additional heraldic imagery.  As for me, I think I did a good job, but I would not advise anyone to take on such a stressful and potentially emotionally hazardous endeavour.

Gretchen Winkler is a Writer, Artist, Radio Show Co-Host, Cosplayer/Designer, and ordered Knight. She is currently working on several Star Wars novel projects and does editing and proof reading for Bill Sikkens & KXL radio. For the past 20 years she has authored several informational websites, started several technical companies, and has been an avid student of art, literature, history, technology.

One comment on “What every Artist should avoid doing”