When I sat down to read my friend’s recently published book of poetry, “Words…”,  I had no idea where her words would lead me.  I knew that it would be about the Great War since she and I both share a deep interest in the conflict that changed Europe and the rest of the world forever.  As I read through the pages and contemplated the meaning of the text and the authentic feel of the artwork included, I realized that what she was expressing about the past was very much a topic of our present day.  And as an American, I am all too familiar with the stories of soldiers coming home to either an ungrateful society or coming home to a place where nothing seems to make sense anymore.  American culture has become a synthesized marketed wasteland of no depth in reality and to arrive to this atmosphere from a place of combat where every moment is spent dealing with life and death situations, it can be a dramatic shock into a numbing landscape filled with people that expect you to feel and act the same way they do.  It was much the same from 1914 to 1929.

When the Great War, aka World War One, ended, many people thought that it was the war to end all wars.  It was so horrible and involved so many different countries that nothing like it had happened before.  It lasted four years and used the latest technology on the battlefield which made it all the more horrific, but probably the worst part of the war was the so poorly conceived treaty that laid the foundation for the Second World War to happen and the devastation to the generation of men that fought and died in that enormous conflict.  A conflict that most of the men on the battlefield did not even understand and to this day most people do not fully understand correctly.

Scars from the battlefield are no stranger to the men and women of year 2012.  Just like their grandfathers and great grandfathers before them, they too understand the devastation and frustration of the phenomenon of Shellshock or as we call it now PTSD.  This complicated malady that has received uncaring reactions from those not afflicted or with no understanding of the repercussions of military combat is slowly coming to public understanding.  During the Great War Era soldiers with Shellshock were treated with derision as if they were criminals and cowards. They were something to be ashamed of and locked away from public view.  After World War One ended few doctors knew how to properly treat these men except for a few like Dr. William Halse Rivers Rivers.  (See more about Dr. W.H.R. Rivers)

Within the pages of S.J. Robinson’s book you will get a timely expression of the feelings felt by the men who fought in the Great War.  She captures the anguish, the longing, the frustration, the confusion, the irritation, the loyalty, the desire, the reluctance, the resignation, and the friendship felt by the combatants.  Even though she writes from an Allied or British point of view, I think the sentiments expressed in her poetry could be felt from all sides and all nationalities fighting in the war.  Just one example of this would be her poem “You Ask Me Why I Weep”.  Every soldier that has ever trained with other warriors and went into combat understands this poem.  It is universal.

You Ask Me Why I Weep

-In Remembrance-
You ask me why I weep
For what happened long ago?
We were not e’er old men,
slowed or feeble, as you know

Why do I hold a paper photo
and shake, paling, as I stare?
If you’d held him as he died,
you’d not question at my tears!

Did you join up beside him?
In a local Pals brigade?
And march and train close by him,
Chuckle at the jokes he made?

Did you stand there, at the ‘Great Push’,
Told of how you’d change the World-
How you’d make your country better?
How you’d impress all the girls?

We kept up moral together,
Hopes and provisions shared;
Went through punishment and square-drill,
Hefted packs, each others’ cares…

No; You didn’t watch him climbing,
His courage took me o’er the Top
Then, suddenly – that morning-
His laughs and jokes just stopped.
—
A bullet through the throat
Killed the mate who’d shared my fears-
And, if you’d held him as he died,
You’d not question at my tears. 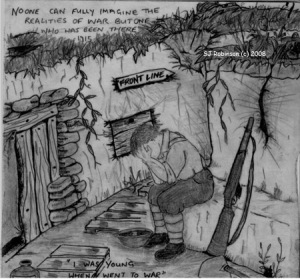 Alongside the poems are charming drawings that feel as if they were drawn on site near No Man’s Land or close behind lines where one might have a few moments to eat, clean oneself, or simply to think of the events of the day and try to pull one’s thoughts back together as a dignified human being.  Perhaps during a time to write letters or to attempt to make sense and record the chaos around and deal with the feelings that such a place evokes.  Loving detail is put into each of these drawings and they look very much like the style of the time.  Drawn simply in graphite pencil on white paper much like what would have been available to the man on the battlefield of the time.

Picking up this book is worthwhile.  Most especially if you are a history enthusiast or lover of poetry, but if you are not a history enthusiast or a lover of poetry, then perhaps you know of some veteran that has served their nation and has endured what is expressed in these pages so authentically and lovingly.  Or perhaps you wish to understand just a little bit more what it was like to go to war and not through Hollywood’s eyes.

This is a realistic understanding with no apologies and just the facts of the cold hard truth told as if penned by one of the men of the trenches.

Words… by S.J. Robinson can be found at http://www.bookdepository.com  or  http://www.authorhouse.co.uk