It’s that time of the year again when one’s imagination and fantasies lead them down that road to deciding on a costume for Halloween.  And regardless of what direction one takes – scary, sexy, humorous, literary, or film characters, there is that scramble to find all the parts to complete a well thought out costume.  I am usually one of those people who construct their own costume, but because of circumstances a great deal of my artistic stuff is packed away in boxes, and they are not easy to get to.  So this year instead of fighting to find all the pieces to great costumes I already have, my husband and I decided to simply buy something to just have fun in.

Store bought costume – the model in the costume looks great, but would I?

Believe it or not, this was hard for me to do.  I tend to be very picky about how things fit and look, and I had to make some personal choices to just let go and let the costume just be for a fun night of silliness.  For me and my husband creating costumes is much like an art project and we always wanted them to be a certain way and we were willing to put in many hours just to make sure it was the way we wanted it.  So with this new attitude in mind, my husband and I went to a couple of the costume stores in town to see what they had.  I had my heart set on doing a super hero costume since it was something I had never done before and my husband wanted to do the same.  So with plans to try on whatever super hero outfit appealed to us, we found a Batgirl and a Batman costumes and then my husband found a wolf costume and wanted me to try on the little red riding hood outfit as well.

I was pretty surprised both costumes looked pretty good on me, but the little red riding hood outfit was WAY too short for my comfort level, so I decided on the Batgirl costume while my husband found the Batman costume to be uncomfortable and selected the plush style wolf costume which was adorable.  So it was going to be Batgirl hanging out with the big bad wolf. 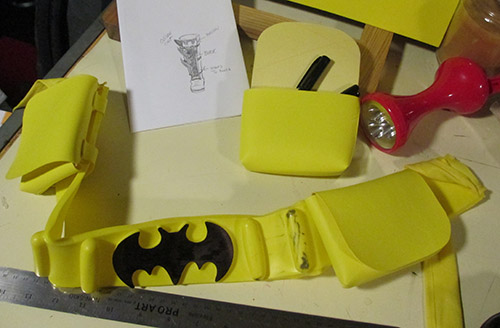 Drew some designs for shin guards after looking at pictures of comic book Batgirl. I also decided to make the bat black on the belt for better contrast. 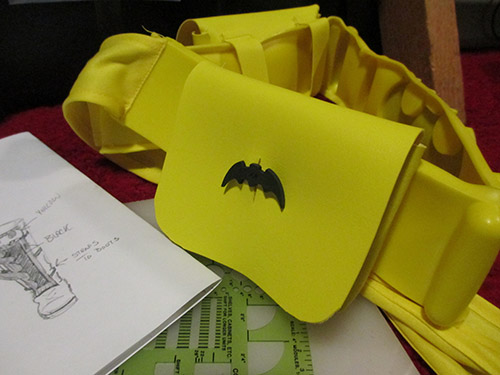 Found black bat buttons for pouch closure. The yellow vinyl was a lucky perfect match to the plastic belt.  The costume came with no way to carry stuff.

Once the foam pieces for the new shin guards were cut out, they had to be glued together. Spray adhesive and then Jewel it glue which sticks to everything.  We also purchased some black elastic and hook and eyes for attaching the shin guards.

But being the people that we are….we could not leave our store bought cheesy costumes alone.  We altered them just a little bit to make them nicer.  And it wasn’t that hard to do.  There are a great of materials out there to help the avid costume maker.  When I started making my own costumes as a kid, we didn’t have all of the nice synthetic vinyls, faux leather, and foam.  The new foam products are awesome!  This stuff would have been great when I made my own Darth Vader helmet out of paper plates, black garbage bags, and white crayon.  So much has changed and for creative folks like myself, there are lots of products out there to help you in your creative process.

So we purchased a small amount of bright yellow vinyl for real pouches on my Batgirl costume, black and yellow sheets of craft foam for cool shin guards for Batgirl, and a pair of black tights.  Then for the big bad wolf we purchased some nice grey faux fur to make a new tail and create a mantle area to cover up the zipper and the neck area.  Just these few additions to the cheesy store costumes really made them better and a lot more fun.

Shin guards or greaves that I strapped onto my leather boots.

So what do you look for in a store bought costume?

Husband and best friend both in store bought costumes with some alterations.

My altered Batgirl costume – not as sexy as the model on the package, but I was comfortable and did not have to construct the whole costume.

So we went to one of the early Halloween parties in town, the Silver Legacy Wild Erotic Ball, and I can share some photo results of how our costumes looked.  We had a good time at this event.  It was the first time we had gone to this one and it was nice to take a break away from the party room noise and walk about the casino, rest in a café, and then go back to the event.  We are contemplating going to another one on Halloween night, the Peppermill’s Skin and Scare Party, if we can scavenge up some ticket money.

So don’t forget you can upgrade those cheesy store bought costumes and make them personal and more fun for the picky costumer, and have a good safe time this Halloween Party season!

Thanks for reading and keep an eye out for Bat Signal…… I mean Observation Post 42 Blog!