Just got home from the Chicken Wing Fest in downtown Reno, NV.

I have mixed emotions about the event since the temperatures in the street were really really hot. I started out with my companions looking forward to tasting really good wings since that is something that all three of us enjoy.  The quest for really good chicken wings seems like a never ending quest, so we arrived with a positive attitude looking forward to doing lots of sampling.

But this did not happen.  It was too hot to eat anything, and when we decided upon what to try for the most part, there was no place to sit and eat the wings.  Now this is crazy.  Eating wings is a messy endeavor and requires a place to sit with some napkins.  And during our trek down Virginia Street, I only saw two places for people to sit – one of which looked like it was exclusive to a certain select group having something to do with the Silver Legacy and another larger one that was off to the side where a stage had a live band playing.

Now having a shaded place to sit with a live band is really nice, but all the wing vendors were really far from this location.  One would have to carry the paper dish filled wings and hot sauce through the crowd and down towards this sitting area.  By that time your wings may have gotten cold and your drink gotten warm – not to mention the possibility of bumping into someone with messy food.  So I have to say that I was a bit disappointed by the lack of shade and seating areas provided for people to use.    Instead people were huddled along the buildings trying to stay a bit cooler, and as a Reno born native Nevadan…..you guys could have sent a street cleaner truck through the road first before setting up and have someone clean up the sidewalks as well.  It was really grimy and uncomfortable to stand next to the buildings to stay out of the sun.  And those of us who live here know how dirty the downtown area can get, so this really should have been considered.

Hot and dirty is not a good combination.

A lesson could be learned from the Sands Casino in that for their most recent outdoor festival where they served sausages and beer – they set up a huge pavilion with tables and chairs, so that their guests could get out of the direct sunlight.  I think something like this would have been greatly appreciated by the guests and the vendors.  Happy customers are more likely to spend more time and money. 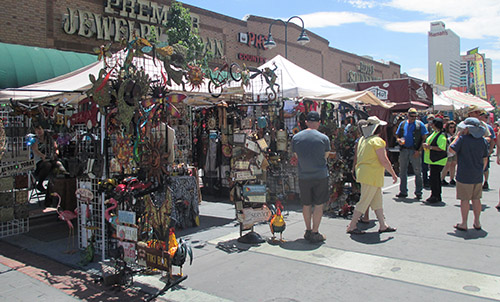 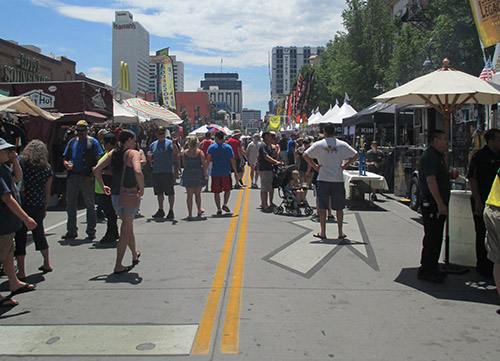 Unfortunately, I have to admit I was somewhat disappointed.  About half or more of the vendors were not food people serving wings or other items to go well with the main course but were products.  And I understand giving other vendors a chance to share their wares, but it seemed like most of the festival space was given to merchandise as opposed to food.  So please for next year more shade and seating near the food vendors and make the focus be the food.

On the up side the two kinds of wings that we did try were excellent.  Most especially the wings from local restaurant Boulevard Pizza.  This was the first time we had ever tried anything made by them.  The flavor of the wings were amazing.  We  will have to make time in our busy schedule to try  their restaurant sometime soon. 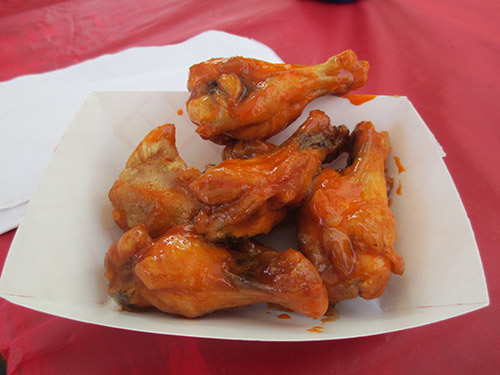 Our wings from Boulevard Pizza!

Now,  it’s time for a nap to recover after being in that heat.