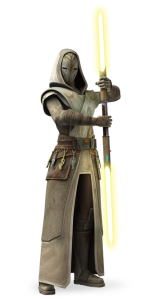 So I have been preparing to start this costume project for a friend.  He decided he wanted a Jedi Temple Guard costume from Star Wars, and I am basing the costume design on the Star Wars Clone Wars animated series design.  I had pretty much finished most of my research by the end of April and was ready to get things started.  I just needed to create the budget list of items needed.  But then I find out that I need to do a few more things to make this okay with my friend’s business needs.  I need to have certain things done so that it can follow standards set down by SAG.   (SAG is the Screen Actors Guild.) My friend belongs to SAG and sometimes he wears costumes for SAG events.  This is fine with me.  I actually belong to SAG myself from my old re-enactment years.  But in order to obtain the licenses and other required business setup – not only does it cost an arm and a leg but the state takes over 10 business days to process this stuff.  I can’t get the budget submitted until I have this paperwork done, so I have lost an entire month to do this project.  And yes, there is a deadline.  He needs it for an event that he plans to attend in the Fall of 2015.

So I am really stressed out.

My friend is trying to send me a costume form that he has to be able to make clothing fit him correctly – you see he doesn’t live near me.  So he had this thing he planned to have shipped not by freight but by a quicker means of transportation.  Guess what.  The shipping company shipped it by freight and not as my friend had instructed or paid for.  ……One stupid crazy thing after another…. so while I was waiting for the state to get it’s one sheet of paper sent to me, I could have been figuring out the pattern for this costume.  I have to make this without the benefit of a pattern, so I need to do some careful planning.  I think my friend shipped the item off over two weeks ago and it was supposed to fly on an airplane and be in my possession within 4 days.  That didn’t happen.  Right now I am waiting for it to be Monday so I can go and pick up this body form used for making clothes.

Scene from Star Wars Clone Wars Series – this has been a really fantastic animated series. I am a big fan.

So here is the next little bon bon that may cause me difficulties… Some of the items I need for the costume will have to be purchased from other places, which means I could end up with slow shipping or items out of stock.  I am already having a tough time finding under garments of the right color.  It is summer time now and no one is offering the colors I need, and I suspect that the colors I need are currently out of fashion.  Yikes.  Then there is another item that I found only in Europe, which I have to modify once I get it. Also, I had found one vendor that made a terrific version of the Jedi Temple Guard mask, but the guy couldn’t be bothered to contact me back after I tried several times to message him.  So I will have to order from the other craftsman, which will mean that I will have more work to do.  I hope he responds better than the other guy.  I am not certain that I have the time or the skill to do the mask from scratch and the others parts as well.  I already have my husband and two other friends planning to help with the dual bladed light saber, which has been a battle of it’s own.

So, I said I would share this adventure with you all.  Here is the planning part of this story.  No matter how well you think you have planned things out, stuff is going to go wrong.  Always plan to have plenty of time to do the project properly because something may happen to delay progress.  To be honest I find it scary to have to rely on others to do their part.  I did not used to feel this way, but life here in the United States has greatly changed in the past 20 years with the last 10 being the worst.  So often people say they will do something and then simply don’t.  Some don’t even tell you that they can’t complete a project, they just disappear and sometimes take your money.  It is really important to me to do a good job for my friend.  I know I can make this costume, and it’s important to me to not let him down or myself.