Star Wars on my mind 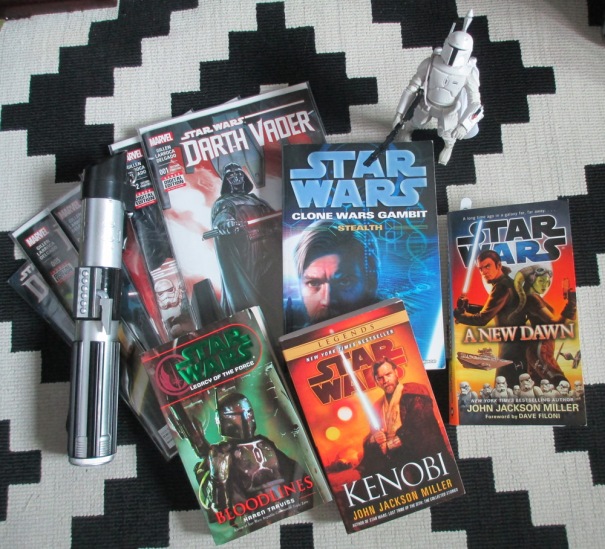 With costume research for my own needs and the needs of my two best friends and then my other friend who wants the Jedi Temple Guard costume made, I have been living and breathing Star Wars pretty intensely for the past year.  I’ve watched the Star Wars Clone Wars series multiple times and have read some excellent novels such as Bloodlines by Karen Traviss, Kenobi by John Jackson Miller, the Clone Wars series by Karen Miller, and just started A New Dawn by John Jackson Miller.    As well as  reading I have also been watching the new TV series the Star Wars Rebels, so at times I find myself utterly immersed in the Star Wars Universe.  I’ve had odd dreams where Boba Fett appears along with Obi-Wan Kenobi!! Curious.  I have found that I have gained a greater appreciation for the Boba Fett character after reading some of the novels and comic books that my husband has supplied me with.  He loves Boba Fett.

So being a writer and an artist I can’t ignore this intense amount of stimuli.  Ideas and stories start to form in my mind.  Lots of “what if questions” come to mind and I have started forming my own Star Wars novel.   At one point last Fall I wanted to write a story with Ahsoka and Ventress on some kind of adventure where they had to work together, but The Rebels series started and then the rumor of the Dark Disciple book came about, so I needed to shelve that idea until I knew more about the new stories being told. The battle in my mind is that I want to stay within the Canon storyline but also respect what has been written by the Expanded Universe authors before me. This would be no easy task.  I have come to realize this.  I will have to settle for doing the best I can.

So I have taken inspiration from the three costumes that my companions and I use for actual characters for my own novel.  So there will be two unique characters and one character from the Canon body of work – the Jedi Wookiee Gungi.  I am just hoping that nothing in the Canon bodies of work state that Gungi died.  So far so good, but that could change at any moment.  At times I wish I could ask the current writers of the Star Wars film materials for advice.  Goodness knows these people are probably inundated with fan mail and people wanting them to read their work.  Can you imagine what Dave Filoni’s email box must look like as well as the physical post box?

So what does one do when inspired to write something that is so much part of a world wide culture not to mention a business venture?  The written material I have read so far is a pretty intense measuring stick to hold one’s own work up to.  Do I spend time on a novel that may conflict with established material and potentially become a waste of great effort and time or go for the gusto and allow one’s imagination to take them on a trip to a far far away galaxy?

I am in conflict with the Force.   Fear and frustration are fighting with courage and creativity.

My inclinations are more Jedi than Sith, but one has to be passionate to write, so I guess there is just a little room for Sith.  🙂