The Nike ad campaign is obviously designed to stir people up and create a buzz about the Nike product.  But when does advertising cross a line in the messages they sell and market to the population?  In the past rock musicians have been put on the spot for the content of their songs.  For example, the band Judas Priest was put on trial for lyrics that supposedly drove two fans to commit suicide.     Ozzy Osborne also had to deal with such accusations.  There have been many controversial ads in past years.  Some have been removed because people have found them offensive such as the H&M “Coolist monkey in the jungle” sweatshirt.   But this particular ad encourages people to throw caution to the wind and not think about the consequences to themselves or others.  Is this a good message during a time when the US has become so polarized?

My husband was browsing through people’s reactions to the ad campaign and read it allowed to me.  The first thing that came to mind was the Twin Towers in New York City.  I felt sick at the thought that this very phrase could encourage such darkness.  Average people think about their actions and how these actions will affect their future and their loved ones.  I am assuming that Nike was trying to encourage athletes to do their best, but  “Believe in something” does not stipulate that it has to be something positive or kind.  Something could quite literally mean anything good or bad.  They are also telling the public they should “sacrifice everything” and “just do it.”  I wonder how hard did they really think about what they were encouraging in this day and age of constant media bombardment.  With Internet trolls, school bullies, intense political hatred, and concern over social media and it’s affect upon US elections as well as our younger generations, is it wise to send this message to a fragile soul who may be on the verge of just doing something and sacrificing everything?  This is a message of extremes.

So my husband and I started brain storming of various situations of where this ad campaign could be used as a call for action.  We easily came up with some rather dark figures from history and I am sure we are missing many examples, but we started to grow concerned that there was no one positive that we could call upon.  We really had to think hard.

These are the dark and somewhat foreboding ideas that we came up with.  I think they speak for themselves. 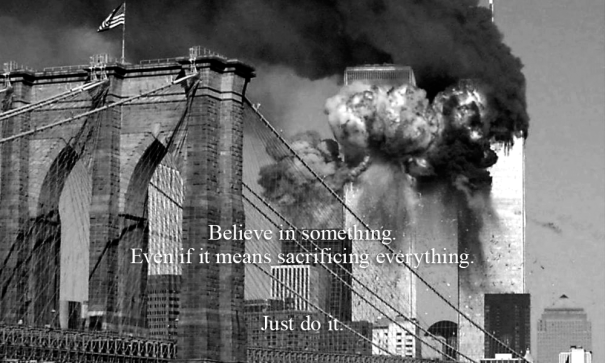 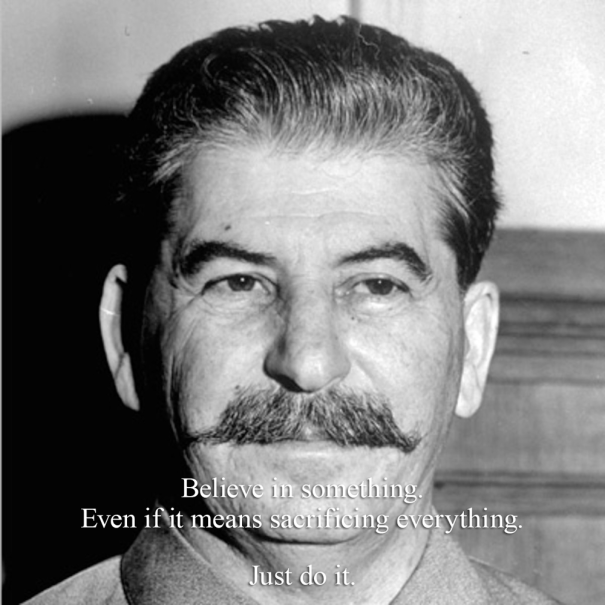 Here are what I would deem as positive examples.  These are all tied to famous people, but I can imagine that many firefighters, police officers, rescue workers, and soldiers would also fall into the positive category of someone who believed in something and literally risked their lives to do what they believed in, but risking their lives does not mean sacrificing everything which would also include the people around them.  So it doesn’t quite fit.  The people that hid the Jews and other people hunted by the Nazis were actually taking a risk that would sacrifice everything, but I don’t know the names of these brave souls, so we used Anne Frank as an example of their belief in something. 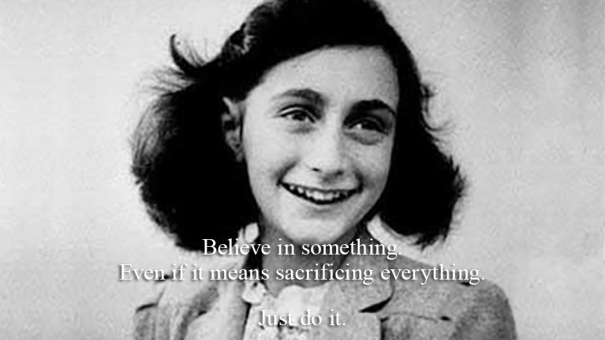 Anne Frank, victim of the Holocaust during World War II – she was hidden by people who dared to defy the NAZI party.  We used her picture to stand for the unknown people that risked everything. 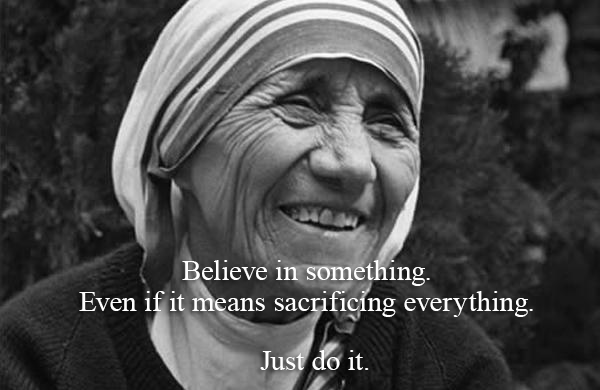 Jesus Christ – religious figure ( I think you can find information on him on your own.)

There are also many characters in literature that would go to extremes to get what they want.  Some would risk dying to obtain their goals and risk everyone and everything around them.  Someone so selfish has to be at the apex of what is described as evil.  Hopefully, you will enjoy the humor of this character being used as an example for this ad campaign that is encouraging people to go to extremes without a thought for anyone or anything else.

Sheev Palpatine – the ultimate villain in the Star Wars Universe.

PS – Remember this is just my opinion, and I am not encouraging anyone to go to extremes.  Please think before you go off and do something stupid.  Think!