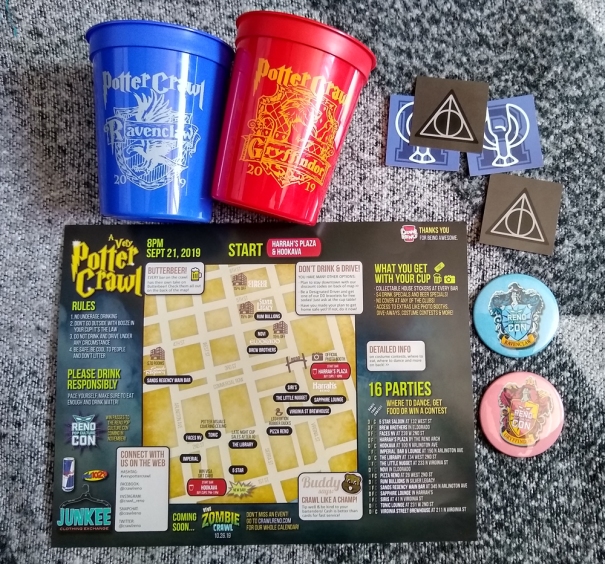 Items from A Very Potter Crawl 2019

Pub crawls are a growing way to create a party atmosphere that involves alcoholic libations, multiple business cooperation, and a certain amount of healthy exercise.  To make it more fun the addition of a theme has been included due to the popularity of Zombie and Santa crawls.  We just attended A Very Potter Crawl in Reno, NV, which focused upon the wonderful world of Hogwarts and the characters created by J.K. Rowling.  A couple of years ago we attended the Epic Crawl where everyone dressed as Star Wars characters.  Since that was fun, we thought (my husband and I) we would attend this one.  And since we love dressing up in costumes, we quickly realized we had to put something together.  As ardent lovers of the Harry Potter series both books and movies, we could not simply go as muggles. 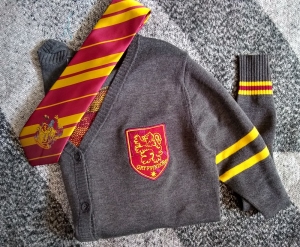 So how hard is it to put together a recognizable or at least a creatively explained Harry Potter Universe appropriate clothing?  Not too difficult.  Currently there are several stores offering a selection of Harry Potter themed items such as Hot Topic and Target.  And we are lucky enough that we are coming upon the Halloween holiday season where the availability of store made costumes and accessories are more available.  The Spirit Halloween store is also currently carrying Harry Potter gear, but don’t go there for Star Wars gear because we did not see any. 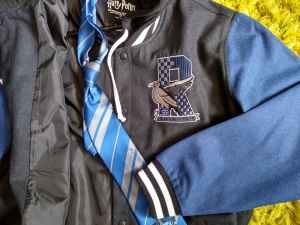 To put together a basic Hogwarts student costume is pretty affordable without much need to be highly gifted in sewing or other crafty skills.  I have seen patterns in fabric stores, so that is an option.  But a very basic ensemble that will be recognizable as being from the Harry Potter Universe can be achieved with about $100.  The velvet student robes are about $40 depending upon where you live and how you obtain them.  The womens/girls student sweater is also around $40.  From my experience wearing them at the pub crawl, they were very comfortable.  My husband has a Ravenclaw varsity jacket that was more but is made very well.  It is a real jacket and not just a costume piece.  My preference has been that costumes should be like clothes – comfortable and well made to endure washing and wear.  Another item that will be helpful is the iconic school tie with your favorite house colors.  We also purchased these for $12, but we have seen them at several locations.  Some may be less or more. 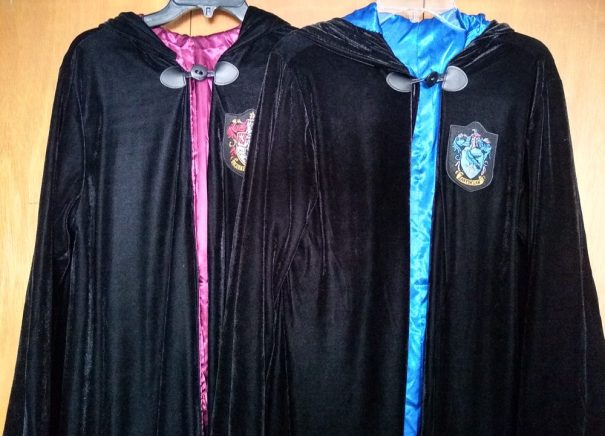 Surprisingly nice wizards robes with house colors and shield patches from the Spirit Halloween store. Pretty comfortable for a very average sized person.   A person with wide shoulders may find them a bit tight.

There are many more items that one could choose to purchase to complete the costume such as scarves, socks, skirts, and hats.  Put together what you feel inspired or are comfortable doing.  During the pub crawl I saw traditional character inspired attire while others went with a more sexy approach.  For example short skirts with high heels and stockings.  If you are a hard core Harry Potter fan, you might want to do one of the more elaborate characters such as the esteemed professors, parents, politicians, shop keepers, ghosts, creatures, or perhaps one of the villains.  There are some great villains to dress up as well.  All of these will take more planning than one week.  Our costumes as Hogwarts students had a basic foundation that we owned other clothing that could be suitably paired with the new costume pieces.  My husband has a pair of black slacks and a button up white shirt.  I also own a button up white shirt and a basic black skirt, so it was easy to pair these items up with the costumes pieces.  We enjoyed wearing these costumes and they were very comfortable.

Now, I left out one important item…….the Wand.  You gotta have a wand if you want to dress up like someone from the Harry Potter Universe.  Find a good stick on the ground, a small branch from a tree in your backyard that you can cut, 3d print yourself one, or buy one of the many official Harry Potter wands.  I have seen those all over the place including book stores like Barnes and Noble.  As a matter of fact, the pub crawl that we attended sold these wands as well just to make sure that everyone had a good time and were well dressed for the event.  We purchased our wands, curiously enough, at the Rose City Comic Con that was held just a week before we knew about the pub crawl.  Ours were made by the Hungarian Wand Shop, and they feel……magical.  They are constructed of real wood. 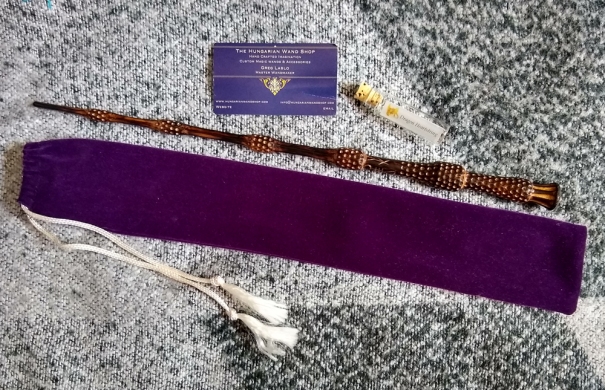 Handcrafted wand made of wood.

So with wand in hand and properly dressed we enjoyed A Very Potter Crawl.  The participating taverns had their own versions of Butterbeer, mixed drinks, and shots in honor of the night’s festivities.  Neither of us are heavy drinkers, so we sampled only a few concoctions and checked out what was happening at least half of the locations on the mapped out list.  All the staff we met were 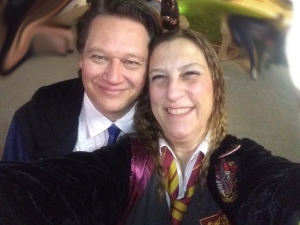 really friendly and what we sampled of the beverages were all good.  I wish we had been able to stay longer to see the costume contests, but those are scheduled for midnight….and well….by then I turn into a pumpkin and just want to be warm and cozy in bed.

Can’t wait for another opportunity to wear our Hogwarts costumes and possibly improve them.  Maybe enlist a few friends to join us?  I know someone who would be perfect as a Slytherin.

One comment on “Pub Crawl meets the realm of Harry Potter”